In the summer of 2015, neuroscience and biology major Amber Barrow boarded a plane to Dalian, China. Her first time in China, Amber took a pledge to speak only Mandarin Chinese for the summer program. Her journey to East Asia started two years earlier when she first heard about the Critical Language Scholarship (CLS) in her freshman forum class. Amber studied Korean in high school and then took on the challenge of studying Chinese after arriving at SU. Her interest in CLS developed out of her fascination for language. 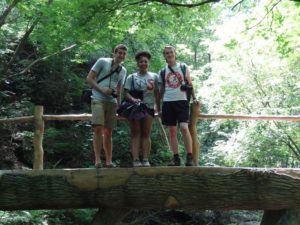 Amber Barrow (center) with two of her fellow CLS participants in Dalian, China.

CLS, administered by the U.S. Department of State, offers fully-funded cultural and language immersion programs for American students. Accepted undergraduates and graduates spend the summer studying and mastering the critical language of their choice. Students apply to one of 14 languages: Arabic, Azerbaijani, Bangla, Chinese, Hindi, Indonesian, Japanese, Korean, Persian, Punjabi, Russian, Swahili, Turkish, or Urdu. Students must demonstrate how their chosen language applies to their academic and professional goals. In some cases, prior study is required.

Amber answered some of CFSA’s questions about her CLS experience.

I actually applied twice! The first time I applied to the Korean language program. Chinese requires two years of required study and I had just begun studying it that year. I knew that applying to the Korean program would be a long shot since I was no longer actively studying the language, but I wanted to try anyway. The first time applying, I struggled to put my thoughts together into a cohesive format. I had been pretty confident in my writing skills from high school, but I think writing for fellowship and scholarship applications requires a certain level of introspection and time management that can be hard for an excited 18-year-old with an unclear career path. Although I didn’t make it past the first selection round, I considered the application process to be good practice. The second time around, however, I was adamant about making it all the way through. I searched all the information I could find on past winners and listened to webinars/YouTube videos on what the program was looking for in an applicant applying for Chinese. I also altered my old essays to fit some of my new experiences after a year of college.

I am not going to lie — it was extremely hard. Although I had previously studied Chinese, the program made me realize how little I knew about the language and culture. Your books can never beat first-hand experience.

We took a language pledge so we could not speak English during the entire program. I really wanted to stick to it, so I was strict about it. One day, I really could not get my point across. Exasperated, I used English, which upset me because I felt like I had failed to uphold my pledge. Instead of dwelling on it, I just brushed it off and used it as a fresh start for the pledge. I also got lost in the middle of Dalian which was SUPER frustrating; I was surrounded by locals so no one spoke English. I had to use my limited Chinese to find out where I was and how to get back home. I finally did get back and even met a Chinese man who lived in Houston, Texas — where I am from!

What were some highlights from your time in China?

One of the highlights was meeting my host “aunt” for the first time. She was a small older woman with a very apparent Beijing accent which gave a harsh edge to her words. Not many people know that China is extremely diverse in culture and language. Because of this, different regions have different dialects. The Beijing dialect, while the standard for Mandarin, can be difficult to understand since it is very fast, somewhat slurred, and adds extra syllables to words. I had met my host “uncle” that morning when he took me to the apartment I would be living in for the next two months. Working at the university, he was accustomed to international students and spoke clearly and slowly for me, repeating himself multiple times or writing down what he wanted to say. However, as soon as my host aunt greeted me, I drew a blank. I did not know what she was saying, what she wanted me to do, and I felt horrible just staring at her while asking my host uncle to translate her Chinese into clearer Chinese. That same night, my uncle left and it was just my aunt and me for dinner. When she brought out the food, she kept shouting, “Chi! Chi!” which translates to “Eat!” in Mandarin. But because of her accent, it sounded harsher than she probably intended. I got scared and didn’t know what to do. After I finally started to eat and she left the room to grab something, I started to silently cry.  I was scared, confused, and wanted to immediately go home. As soon as she came back, I wiped my tears and pretended nothing happened. After the first week, we started to grow closer. I began to understand her more and more. My teacher even complimented me on how fast my listening skills improved compared to my classmates. I laughed, knowing that it was definitely all due to my host aunt and her Beijing dialect. Even now, my host family and I still keep in contact.

Do you recommend that other Syracuse students apply for CLS?

Yes, but only if you are certain that you will use your chosen language in the future. Also, you must understand how demanding and stressful the program can be. When they say intensive, think of what that means to you and then multiple the intensity by 20. You will be in a location with virtually no English other than your name (even then, we all had Chinese names!). I cannot stress enough how tough this can be mentally and physically. If you are fine with the challenge and excited about being a cultural ambassador, apply. When you go to another country,  especially countries where Americans rarely go, you will likely be the first foreigner that some people will have met. This is especially the case for those of us of color. Your actions will be observed and then used as a template for understanding others of your culture or ethnicity. Remember that even if you are having a bad day, someone who has not met you is observing. There were plenty of times when I was asked about being black, or why my hair was a certain way, or why my skin color was this instead of that. I happily explained because these questions came not from animosity, but genuine curiosity. Also — people love to talk! If you tell a local something, 20 more people will know by the end of that day. It is a wonderful way to spread accurate information about your country, ethnicity, and culture.

Do you want to learn more about the scholarship? CFSA will host an interest session on Friday, September 30 from 1:00-2:30pm in Eggers Hall 352. CFSA Director Jolynn Parker will present on the scholarship and CLS alumna Amber Barrow will be available to answer questions. Applicants to this year’s award are also encouraged to attend the CLS writing workshop hosted by CFSA on Friday, October 28 from 1:00-2:30pm in Eggers Hall 352.