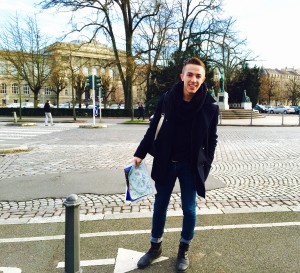 Ricky Cieri stands in front of the Brant Université building in Strasbourg during his semester studying in France.

Rick Cieri had already studied in Strasbourg and Madrid and mastered three foreign languages by his junior year at SU. Looking for a new challenge outside European politics, the dual international relations and modern foreign languages major picked up a pamphlet on the Boren Scholarship and applied. The Boren Scholarship, which funds up to a full year abroad of coursework for undergraduates, will allow Rick to study Portuguese language and Brazilian politics in Brazil.

An initiative of the National Security Education Program, the Boren awards include the Boren Scholarship for undergraduate study and the Boren Fellowship for graduate study. Both awards provide funding for students to study languages in regions relevant to U.S. interests and underrepresented in study abroad. Scholars and Fellows demonstrate an interest in national security and commit to working for at least one year in the federal government.

In an interview with CFSA, Rick described the application process and his motivations for applying to the Boren.

Why did you apply for the Boren Scholarship?

I learned about the Boren Scholarship at the beginning of my junior year by picking up the pamphlet in the international relations department. I had just returned from a semester abroad in Strasbourg, France and a summer program in Madrid, Spain, and I was considering the option of studying abroad again. I also knew I would be able to graduate a semester early, so I decided to look into the opportunity to study abroad for the entirety of my senior year.

The application process was quite challenging at times, but a very manageable process even with coursework. I began my application process in September by meeting with the campus representatives for Boren to discuss the nature of the program and my potential. The essays do require a lot of attention, but by setting aside time to work on my Boren application, I was able to write the essays rather quickly and easily.

Did you learn anything about yourself during the application process?

Throughout the process I discovered that when I take the initiative, I will be successful. No one was pressuring me to make the submission deadlines, to write the essays by a certain date, or to contact my recommenders in advance. I had to discipline myself to ensure that I prepared all documents thoroughly before the February deadline.

What do you think made you a successful candidate?

I believe my clear passion for foreign languages and global learning truly set me apart as a competitive candidate. During my junior year, I had been a student representative on a faculty-led committee on the Internationalization of Curriculum. Through my participation on this committee, my work as a global ambassador for the SU Abroad office, and my commitment to studying three foreign languages at the university, I stood out as a student who would take a Boren-funded abroad program very seriously.

How did you work with CFSA?

I honestly got a late start in working with the CFSA to prepare my application. I did not know how truly helpful the office would be for me in my application process. In the few weeks leading up to the application deadline in early February 2016, Jolynn Parker proved to be such an amazing advisor. She really encouraged me to piece together the best possible application, and I feel like I did just that.

What advice do you have for future applicants?

I am so very excited to be able to learn more about a country that has somehow avoided a place in my curriculum. Having never taken a Portuguese course and having focused my IR major on European politics and international relations, Brazilian politics and domestic issues were not often a topic of discussion in any of my classes. Thus, I am most eager to learn about Brazil, to live within this transforming country (especially considering my first full month in Brazil will be during the 2016 Summer Olympics), and lastly to acquire a new language.

Rick was featured more recently in SU News for his Boren award and his scholarship at Syracuse University. Read the article here.