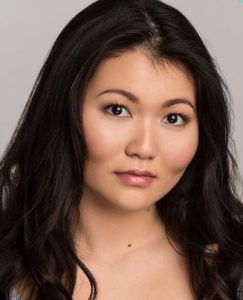 Candice Hatakeyama, a senior musical theater major at Syracuse University and former member of SU's Young Research Fellow’s (YRF) Program, recently showcased excerpts from her musical adaptation of the novel A Tale for the Time Being by Ruth Ozeki on Facebook Live. Her adaptation, which was watched by more than 1,000 viewers when it was debuted on Facebook Live, was developed in part through support Candice received from the YRF Program, a collaborative initiative between SU’s Center for Fellowship and Scholarship Advising (CFSA) and Syracuse’s Office of Undergraduate Research and Creative Engagement (SOURCE) that offers sustained mentorship and funding support to undergraduate students wishing to pursue independent research projects. Melissa Welshans, CFSA’s assistant director, recently spoke with Candice on Zoom about her adaptation, her experience with YRF, and her future goals. Excerpts from their interview are below, with content edited for clarity.

The project actually started all the way back in high school, when I read the book A Tale for the Time Being as part of an English class in sophomore year. I had enjoyed the book but sort of left it at that, until I took a “Fiction and Film” class my senior year where we had to take a piece from one medium and translate it into another. I chose to explore adapting A Tale for the Time Being into a musical for that assignment. I had actually written a musical already in my sophomore year with some friends, so when I took on the task of adapting this book, I felt like I had some experience. Given the magical realism of the book, I also thought it would translate well to musical theater. I wrote a draft of an opening number with lyrics and basic chords for the assignment. My teacher gave me great feedback and encouraged me to continue exploring the idea. Then, my freshman year at SU, I received an email from administrators in the Theater Department seeking applicants for the CFSA and SOURCE Young Research Fellows Program, emphasizing that it was open to all majors including theater. My assumption was that a lot of research programs are interested primarily in STEM research, so it was great to learn theater would be considered as well.

What was it like seeing your idea come to life? 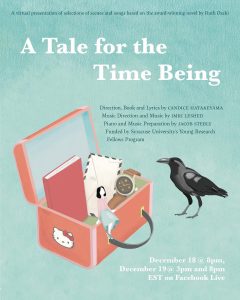 It was incredible. When I started I didn’t have a composer, so my good friend and fellow musical theater classmate Imri Leshed agreed to take on the roles of music director and composer. We wrote for about a year and a half, and were intending to have a live staged reading in April 2020 before the Covid-19 pandemic hit. We had to scrap that format, but luckily because of shifting to a virtual format we were able to reach out to alumni and individuals from other Universities to participate. Part of my project is a desire to uplift Asian American voices and Asian American performers, and by using a virtual format we were able to create the show with an all-Asian cast.

It was incredible acting as a director on my own for the first time, and seeing talented actors bring characters to life that so far had only been on paper. When I write I have a very set character in mind, and sometimes that can be blinding to other possibilities for how the character can be played. Seeing what these smart actors did, and the interpretations they gave to their characters, made my job as a director and writer really easy, and even gave me ideas as to how to edit the piece.

How did the Young Research Fellow’s Program support your project?

YRF provided up to $4,000 for the research which was incredible. I was able to purchase Final Cut Pro, an editing software, and give a stipend to actors. It was great to offer financial support to actors during the Covid-19 pandemic, most of whom were living in New York City and out of work because of the pandemic. The funding also helped me work with a graphic designer to do the logo and design for the poster, and hire a pianist. The program required that I have a faculty mentor, and Brian Cimmet, a professor of musical theater in the Department of Drama, graciously agreed to fulfill this role. I enrolled in a couple of independent studies with him where he provided feedback on the project. I also received helpful feedback from frequent meetings with other Young Research Fellows. It was really cool to see all the amazing work they were doing, too. Even though we were all in different fields, there was a lot of mutual support and excitement with each others' projects. Everyone was really open to feedback and advice from other Fellows.

Where will you take the project from here?

I’m currently taking a break on it to focus on finishing my degree, not to mention the state of theater at the moment. But receiving positive feedback from friends and classmates [after the Facebook Live presentation of the musical adaptation of A Tale for the Time Being] was the positive feedback I needed to want to continue the project. Before then it was more of a passion project, but it was great to see that people enjoyed it and wanted to see more. I will continue to edit and explore the piece. No matter what, I will continue writing.

What are your future goals?

I hope to stay in New York City after this coming semester [where I will be finishing my degree], audition (if there are auditions), and continue to stay creative. A lot of people I’ve talked to who are actors in the city said that although the career path is difficult and jobs are scarce, finding outlets for your artistic passion and making something is really important.

What advice do you have for other theater or creative majors who might be interested in applying for research grants and specifically the Young Research Fellows Program?

Go for it! I was worried what I wanted to do wouldn’t be considered research since it’s not the “typical” lab project or research paper, but it is. And applying for these awards when you’re in a creative field helps legitimate the arts, especially now. Looking at where people went to cope with the stress of a global pandemic, they coped with theater, movies and TV. The arts, now more than ever, are an integral part of life. They can be therapeutic, they can be an escape, and can be a spotlight on humanity. There’s a quote that art should ‘comfort the disturbed and disturb the comforted’ and I really look to that quote when I’m creating and performing. If you want to do a more creative research project, you shouldn’t think your project is any less important than another. Art has been around as long as humans have, and is a part of us that if we don’t cultivate and research, it can fizzle out. The Young Research Fellows Program was very supportive of my project, and others in creative majors should definitely apply!